Christian elder and blogger Tim Challies has written an article asking “What if God doesn’t Care a Whole Lot About How You Educate Your Children?” Actually, the title is the form of a question, but article takes the form of an answer and an argument. He proposes that God does not much care how you educate your children.

One of the main reasons not to send your children to public school is so that they don’t become the sort of Christian that would write this kind of article. This article is evidence that Challies is unwittingly a victim of secularization.

His foundational assumptions about education are revealed in this:

I suppose we could say that the goal of parenting is to raise children who are well-skilled and well-adjusted so they can contribute to society. Then as Christian parents we have the additional goal of raising children in the discipline and instruction of the Lord with the expectation that they will come to faith in Christ.

In Challies’ view, contributing to society is a faithless activity. It’s also more fundamental to child rearing than a relationship with Christ. The basic parental duty is non-Christian. Religious instruction (that’s all that Ephesians is referring to) is an additional goal placed alongside.

Secularization (or secularisation) is the transformation of a society from close identification with religious values and institutions toward nonreligious values and secular institutions. The secularization thesis refers to the belief that as societies progress, particularly through modernization and rationalization, religion loses its authority in all aspects of social life and governance.

Secularization is a process at work in the society in which Tim Challies was born and raised. It’s not his fault he has been turned into a Christian zombie. He and millions of others like him don’t see that they have separated large portions of daily life from the lordship of Christ. They can’t see this because they’ve been infected with the virus that turns otherwise God-fearing Christians into mindless, shambling hordes. 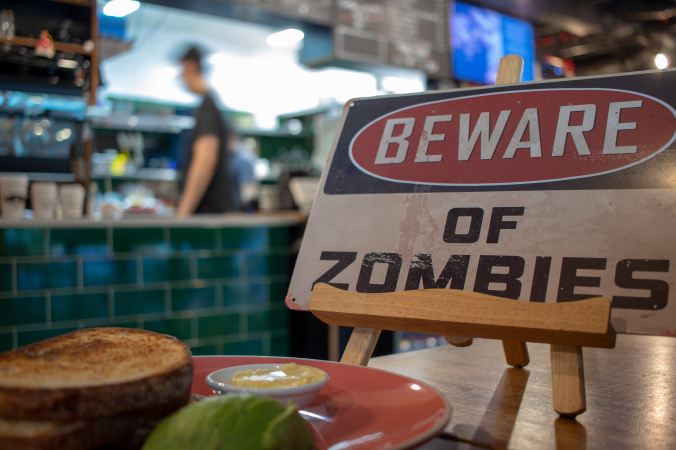 Photo by Chris Hall on Unsplash

Promoting secularism, then and now

Once upon a time, the tip of the secularization spear was in arguing that the institutions of society should give up their religious character. The secularists had to make this argument because all of society was at least nominally Christian. Governments throughout Europe officially recognized Jesus as lord. If you inquired as to the basis of society anywhere from Poland to Portugal, from Sweden to Sicily, the basis was that Christ is lord. Besides the governments, the schools were Christian, the homes were Christian, the businesses were Christian. Arts, crafts, industry, science – it was all Christian. This meant that secularists who wanted to move society away from Christ had to make the argument that such things need not be Christian.

Today it is considered obvious that schools, businesses and governments will continue to operate as they always have (ahem) whether Christ is lord or not. We readily believe this because the institutions of daily life are officially agnostic. And yet, many of us consider ourselves Christians. This means that we lead double lives. And we do so easily, having been raised this way since childhood. We are Christians personally, privately, but not in our official capacities. Consequently, our practice is to recognize that Christ is lord sometimes, but not other times. When a man acts as superintendent of schools, he denies Christ. When a city council convenes, they’ve never heard of the man. When the head of sales and marketing presents the new ad campaign, he assures everyone that he did it strictly for the sake of the bottom line. And in case you’re wondering, the bottom line is not the lordship of Christ.

Back when every institution of life was officially Christian, you could point out deviations from faithfulness to Christ as inconsistencies with that institution’s mission statement. Of course their were flaws and imperfections everywhere, but there was also real evidence of obedience. The obedience was tradition because faithful Christian men had staked their lives on the lordship of Christ over every aspect of life. They had built those obediences into the common life of the institutions they influenced.

This doesn’t mean that every teacher who opened the school day with prayer was truly faithful to Christ. It does mean that he had to act like it. Even if he suspected that society could function just fine without Christ, he had good reason to question that suspicion- he had never seen society function without Christ. It just wasn’t done.

Making the argument that society would function fine was initially the bread and butter of the secularist. He had to convince everyone that the wheels wouldn’t come off the wagon of Christian civilization, as it was known back then. Everyone was acting out of either sincere or feigned Christian faith and it was possible that substituting a different foundation would radically transform life into to something strange and unpleasant. It was possible, for instance, that schools would cease to educate, businesses would lose all sense of ethics, governments would be hopelessly corrupt and bastard children might be the rule rather than the exception.

Generations ago, argument was the tip of the secularization spear, opening inroads into daily life. Today that spear has been driven home and lodged in the breast of all our institutions. The outward form of daily life is non-Christian. If there is a unifying foundation of our society today, it is that Christ is superfluous and unnecessary. We don’t need to acknowledge him as lord in order to teach reading and writing. We don’t need him to manufacture widgets, or treat cancer, or make movies. The secularist no longer needs to speculate about what life would look like without Christ. We are collectively living it right now.

Today the bulk of the work of secularizing minds and hearts, of separating them from the universal lordship of Christ, of teaching people to see the world as divided into fundamentally secular pursuits and ever shrinking religious commitments, the bulk of the work is done by daily life. The shape of daily life and the habits of our institutions present Christ as a third wheel. Less than an afterthought, Christ is an optional extra. We might argue over whether he is more like a racing stripe or a moon-roof, that is, whether he has any function at all. What we can not argue, what you can not explain to your children today, is that American society is the result of Christian faith put into practice. It simply isn’t that. And this fact will make a tremendous impact on your children.

Secularization already got to Tim Challies. That is why he doesn’t even consider whether “bring them up in the discipline and instruction of the lord” is a commandment concerning the education of our children. Of course it isn’t, because education is secular, while the lordship of Christ is religious. We know this is an appropriate division because we live it out every day.

What is the result of confessing that Jesus is Lord and yet denying him in the way we live our lives? We deceive ourselves. The very words of scripture are slipping away from us because our manner of life makes their plain meaning unthinkable. The force of the commandment is negated by the practice of daily life. Our secularized lives are producing a blindness, an illiteracy, an inability to even see the discrepancy between our daily habit and the commandments of Christ.

This is the origin of the shambling, Christian zombie- a person who professes to have found new life in Christ, but looks just as dead as everyone else. They shuffle along, going through the motions of modern life. Never really living, never really dying.

And what would you expect? If Christ is the vine and we are the branches, what becomes of our institutions when they are severed from Christ? The sap is runs out, the leaves wither and the fruit- what fruit? was there supposed to be fruit? The lessons your children will learn from a secularized society are the same lessons you’ve learned, that life is fundamentally secular and society functions pretty well without reference to Christ. These lessons provide the basic worldview that allows Tim Challies to conclude that God doesn’t really care.

That by the way, is the catchphrase of the Christian zombie, not “BRAAAAAINS!” but “IT DOESN’T MATTER. Unnnngh. GOD DOESN’T CARE.”