Yesterday I wrote about how Jesus avoided arrest. The law enforcement officers were afraid to arrest him because “never man spake like this man.” The officers were right to hesitate at arresting the Son of God, not only because of the injustice of it, but because it might well have been dangerous for them! After all, did this man, Jesus, have less power than Elijah the Tishbite, whose disobedience was anything but civil? 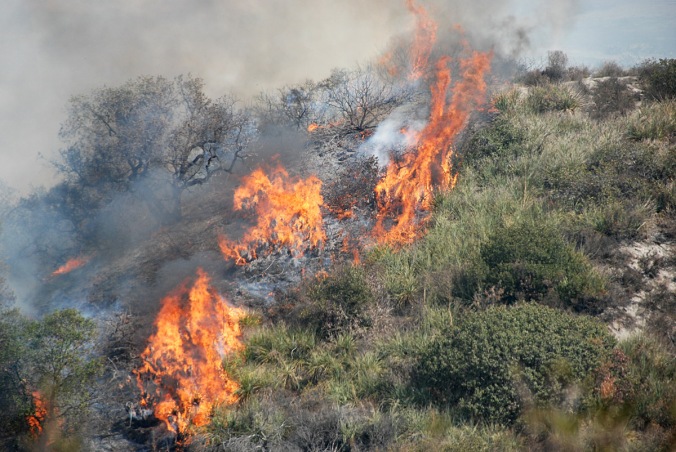 In the first chapter of 2nd Kings, Elijah rebuked the king of Israel and prophesied his death. The prophesy against the king came because the king turned to a pagan god, Baalzebub, in a time of personal crisis. Elijah spoke the prophesy to the messengers that the king had sent to inquire of Baalzebub. When the prophesy was told to the king, he sent a captain and fifty men to apprehend Elijah.

Then the king sent unto him a captain of fifty with his fifty. And he went up to him: and, behold, he sat on the top of an hill. And he spake unto him, Thou man of God, the king hath said, Come down. And Elijah answered and said to the captain of fifty, If I be a man of God, then let fire come down from heaven, and consume thee and thy fifty. And there came down fire from heaven, and consumed him and his fifty.

Did the commandment of God contradict the commandment of the king? Given what happened, we might well assume that it did. But we should realize that “thou shalt not come down” is not one of the ten commandments. There was no command against coming down from the top of a hill. That would be silly. So then Elijah must have known by special revelation that the king’s command was not to be obeyed. God told Elijah how to respond in that situation and inspired him to say “let fire come down out of heaven.”

This incident is a tremendous demonstration of the power and authority of God. Does the king think he has authority of the servant of God, to tell him what to do and what to say? The king has no authority at all in comparison to the God of heaven and earth. Nor does the power of the king and his armed men represent any obstacle to the will of God. The servants of God should show courage in the face of threats and faithfully obey their master in heaven.

Incredibly, the king of Israel sent another band of armed men to fetch Elijah. The new captain delivered king’s command, but this time he added the magic word, “come down…quickly!” It went poorly for him. Elijah answered the same way he did before, and fire consumed this second band of fifty.

The third captain that was sent to bring in Elijah handled things very differently, falling on his face before the prophet, and begging for mercy. God instructed Elijah to go with him. The prophet went and told the prophesy to the king’s face. Not a word was changed and the rebuke was as strong as ever.

I don’t know whether this incident was remembered by the officers sent to arrest Jesus. But it was remembered by some of Jesus’ disciples when a village of Samaritans disrespected their master. Because of the longstanding ethnic strife between the Samaritans and the Jews, these villagers refused to show hospitality to Jesus on his way to Jerusalem.

And they did not receive him, because his face was as though he would go to Jerusalem. And when his disciples James and John saw this, they said, Lord, wilt thou that we command fire to come down from heaven, and consume them, even as Elias did? But he turned, and rebuked them, and said, Ye know not what manner of spirit ye are of. For the Son of man is not come to destroy men’s lives, but to save them. And they went to another village.

Although Elijah, the servant of God, and Jesus, the son of God, were both disrespected, I think the situations are not all that similar. There was no threat or intimidation by the Samaritans. They weren’t seeking to use force to prevent the word of God being spoken or carried out. Jesus knew he would be rejected by some and welcomed by others. He simply went to another village.

The officers being sent to arrest Jesus at the feast is a much closer parallel to that of Elijah in 2 Kings. Again, I can’t say whether the officers thought of the Elijah incident, but it was wise of them not to follow through in attempting to arrest the messiah. They certainly wouldn’t have succeeded.